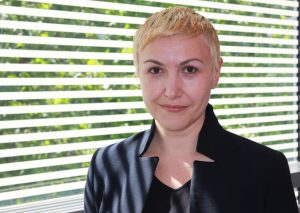 It was a great pleasure hosting and listening Professor Elena Simperl talk: “The human face of AI: how collective and augmented intelligence can help solve societal problems”. The event took place on the 26th of June. We would like to thank Elena for the inspirational talk!

Elena Simperl is professor of computer science at King’s College London, a Fellow of the British Computer Society and former Turing fellow. (https://www.kcl.ac.uk/people/elena-simperl).
According to AMiner, she is in the top 100 most influential scholars in knowledge engineering of the last decade, as well as in the Women in AI 2000 ranking. Before joining King’s College early 2020, she held positions at the University of Southampton, as well as in Germany and Austria. She has contributed to more than 20 research projects, often as principal investigator or project lead. Currently, she is the PI of two grants: H2020 ACTION, where she develops human-AI methods to make participatory science thrive, and EPSRC Data Stories, where she works on frameworks and tools to make data more engaging for everyone. She authored more than 200 peer-reviewed publications in knowledge engineering, semantic technologies, open and linked data, social computing, crowdsourcing and data-driven innovation. Over the years she served as programme and general chair to several conferences, including the European and International Semantic Web Conference, the European Data Forum and the AAAI Conference on Human Computation and Crowdsourcing.